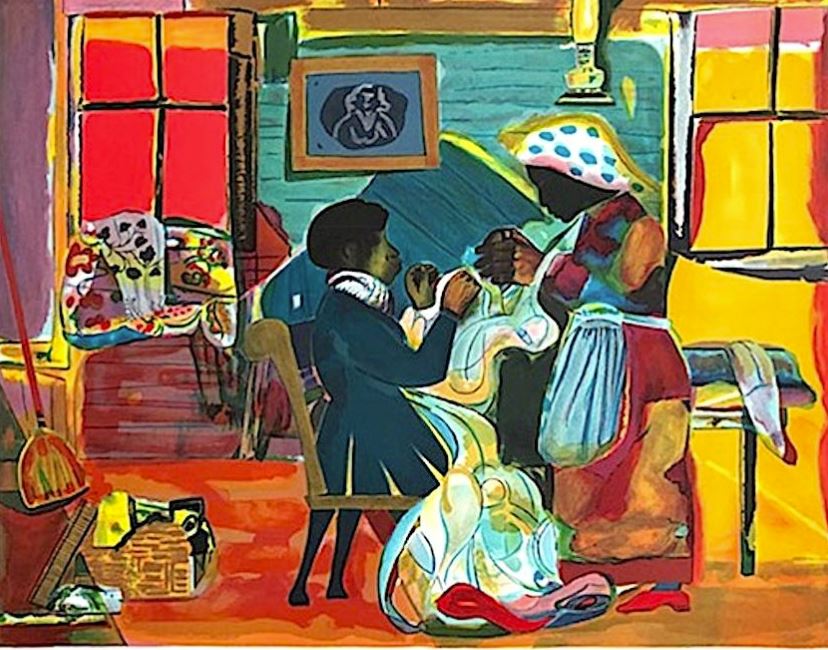 Born in 1911 in North Carolina, Romare Bearden is considered one of the most influential African American artists of the 20th century. His family relocated to Harlem, New York when he was a toddler during the Great Migration. The artist spent time between the urban settings of the Northern states and the rural South. Bearden’s upbringing was influential for his art as many of his works depict these differing African American communities in both regions. The seemingly ordinary depicted in a variety of Bearden’s work, there is also a socially conscious aspect that the author aims to portray. The heightened political climate throughout the 20th century impacted the art world and swayed artists to explore philosophical, political, and social commentary in their artistry.

Bearden’s work typically tries to create compositions that retold universal tales by incorporating aspects of African American life throughout. In “Quilting Time”, the two figures are intentionally painted with extremely dark skin making it clear that they are meant to represent African Americans. The scene can be believed to be in a southern home, because there is a certain level of quietness that urban cities seem incapable of accomplishing. The southern region also had ties to quilting for the African American community. Enslaved people didn’t have access to many supplies, so the things they made were often made of materials they could find. The patchwork design of quilts enabled fabric scraps to be utilized efficiently in creating a new textile.

Exploring the aesthetic qualities of “Quilting Time” shines light onto Bearden’s relationship with cubism, abstraction, and post-impressionism. Post-Impressionism and cubism both valued bright colors and geometric forms which are present in this work. The composition has intentional horizontal and vertical lines that were also influenced by cubism, but also could reflect the gridlike patterns of quilts. Although there is some abstraction present in this work, Bearden felt that pure abstraction couldn’t portray his message strongly enough. This discovery caused his work to shift from displaying narratives with abstracted representation to eventually practice collaging.

Apart from creating paintings and prints, Bearden is most well known for his work as a collage artist. As an artist committed to reshaping old stories in order for different groups to connect to them, it seems fitting that Bearden would thrive with a medium that asks him to create something new from what was provided. Not only did Bearden make a name for himself in the art world, but also for his activism. He has won many awards for his community outreach programs advocating for young African American artists. The message behind many of Bearden’s works was one that he practiced in his everyday life as he strived to develop a solid foundation for the youth of his community and their presence in the art world.

Back to Picture of the Week Archive