With permission from Danto, Bull and The Writer Herber Gold, both 1959 woodblock prints, have been re-printed by graduate students of the Wayne State University Printmaking Program from their original woodblocks, for a special, relatively small edition of 35 prints each.  Sales of the prints will go to the creation of the Arthur C. Danto Scholarship for students in the James Pearson Duffy Department of Art and Art History at Wayne State University.  The prints will be signed by Danto. 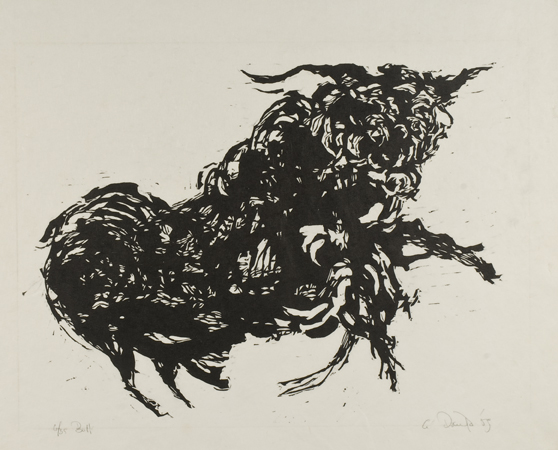 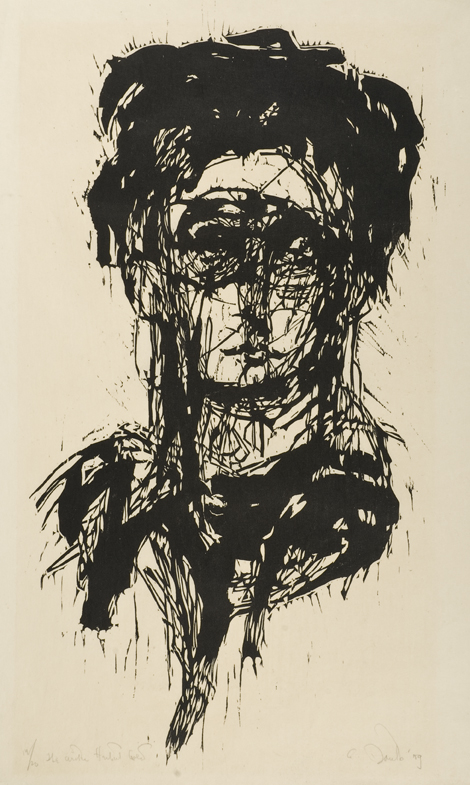 Many are aware of the enormous contributions Arthur C. Danto has made to contemporary art through his writings on philosophy and criticism.  The 'artworld' as it has become known was first defined by Danto as a means to explain how Andy Warhol's Brillo Box of 1965 was a work of art.  However few know Danto as a successful artist — a decade-long career that preceded his tenure as one of the most highly regarded philosophers of our time.  Recently, to much excitement worldwide, recognition of his artmaking is being revived.

Danto, who grew up in Detroit and studied fine art at Wayne University (now WSU), achieved considerable success in NYC as a printmaker from the early '50s, exhibiting in such places as the Art Institute of Chicago, the Detroit Institute of Arts, and the National Gallery of Art.  Following his solo exhibition at NYC's Associated American Artists gallery in 1960, Danto gave up artmaking and turned his interests exclusively to philosophy and art criticism.  He is the Johnsonian Professor Emeritus of Philosophy at Columbia University, and from 1984 - 2008 was the art critic for The Nation.

ABOUT THE CREATION OF THE SPECIAL EDITION PRINTS & MASTER COLLECTION 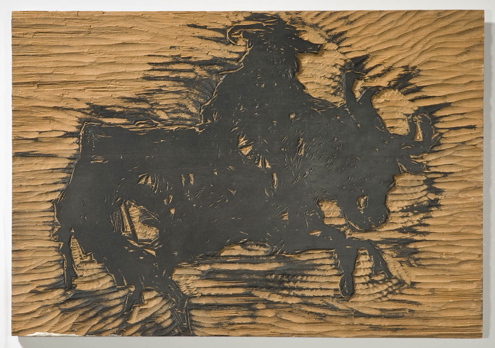 On Saturday, October, 15th, 2011, the University Art Collection, partnering with Professor Stanley Rosenthal and the Printmaking Department of the James Pearson Duffy Department of Art and Art History, presented the Arthur C. Danto Printmaking Open House and Demonstration, in the second floor printmaking studios of the WSU Art Building.  Funded through a grant from WSU's Research Enhancement Program (REP) for Arts and Humanities, the half-day long event was open to the public, free of charge, to experience the production of art prints in a professional printshop atmosphere, to witness the creation of two special editions of Danto woodcut prints, The Writer Herbert Gold, and Bull (to be sold to benefit the newly established Arthur C. Danto Scholarship), and to learn about the various techniques and methods of printmaking.

The REP grant also funded the printing of several Danto woodblocks that were unrepresented in the suite of prints that came from Danto.  Additionally, upon completion of the Danto Master Print Collection, the University Art Collection will create a special online-exhibition of the work, which will include an essay by Danto titled "Stopping Making Art," as well as essays by WSU grad students in Philosophy and Art History, examining links between the artwork and philosophy of Danto.