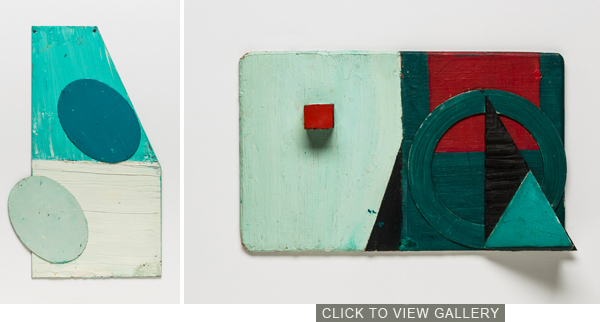 Since its rise to prominence in the 1970's, Installation art has been a medium which encourages the use of non-traditional materials, forms of presentation, and processes of creation. Judy Pfaff (b. 1946), an artist who is most noted for such work, employs all of these approaches in her installations which span multiple media including drawing, sculpture and painting. Pfaff has received numerous awards, including a John D. and Catherine T. MacArthur Foundation Award (2004), fellowships from the John Simon Guggenheim Memorial Foundation(1983) and the National Endowment for the Arts (1986).

Pfaff's life has been active and migrant—she lived in three countries, and attended four institutions, each in different states, before obtaining her first degree. Born in London shortly after the end of World War II, Pfaff relocated to Detroit with her mother when she was thirteen. While growing up in Detroit, she found herself struggling with subjects like math and science, but excelled in art and humanities. Pfaff enrolled in Cass Technical High School in Detroit—a school known for its vital arts program. In 1965, Pfaff attended Wayne State University, where she studied for a few semesters. Though Pfaff never received a degree from Wayne State University, she sites her experiences at the institution and the instructors she met there as being important to the formation and development of her work. Three years later, the artist moved to Illinois and began attending Southern Illinois University. Like Wayne State, Pfaff only attended this institution for a few semesters before moving to Lund, Sweden, where she worked on a farm for a year. Upon her return to the United States, Pfaff attended the Norfolk Summer School of Music and Art, and finally Washington University in St. Louis where she received her BFA in 1971. In Norfolk, Pfaff began assisting head of the summer program—Robert Reed, a noted abstract painter who later helped her get into Yale's prestigious MFA program. While at Yale, Pfaff studied under the abstract expressionist painter, Al Held, receiving her MFA in 1973.

These life experiences permeated and made an imprint on Pfaff's work which is eclectic and energetic--combining heterogeneous materials spanning from artificial flowers to Chinese paper lanterns. These materials come together to form abstract works that convey complex emotions. In her most recent gallery exhibition at the Susanne Hilberry Gallery in Ferndale, Michigan (June 8 through September 14 2013), Pfaff uses honeycomb cardboard, expanded foam, melted plastic, and fluorescent lights to create sculptural installations which vacillate between bursting energy and melancholy. Throughout the years, her work has developed from small, personal sculptures to large-scale installations. However, even though her work has transitioned, the visible physicality and poetic articulation have stayed a constant. The collection at Wayne State University contains thirteen of the artist's early works, which bear an underlying resemblance to her current work, including the work in her recent exhibition at the Susanne Hilberry Gallery. These sculptures and objects were acquired by James Pearson Duffy, whose donations make up a large portion of the Wayne State Art Collection. In a correspondence via e-mail, John Egner, Wayne State University faculty and a Cass Corridor artist with a close connection to Duffy, explains how these works were acquired after a visit to Pfaff's first solo exhibition at Razor Gallery in New York in 1973,

"Jim [Duffy] and I first saw Judy's work at a gallery on West Broadway in Soho. … It was a one person show which was about as crazy and inventive as anything I had ever seen, one huge installation of painted and sculptural elements hanging from the walls and ceiling and strewn about the floor, very mad and energetic. We visited her in her studio and most likely Jim bought all of those pieces at one time. The painting department at Wayne subsequently hired Pfaff as a one term sabbatical replacement."

In Pfaff's sculpture Hans' (antique), 1974, made of wooden blocks and oil paint, the artist assembles the materials together in a way that conveys a kind of rhythm—blocks of wood jump out and pierce three-dimensional space in a seemingly desultory manner. The perception of depth is amplified by the warm colors which are offset from the cool green and blue hues in the background. This proclivity toward work that considers the perception of three dimensional space, both physically and through illusion, is a binding characteristic between Pfaff's early work and her current work. In her current large-scale installations and sculptures, elements come out from the background of a piece and poignantly become obvious to the viewer, similar to Hans' (antique). The same can be said of Pfaff's use of color in her current work—brightly colored materials are placed among cool, subtly-colored objects, adding a perceived spatial depth as the bright colors spate themselves from the subtle ones. 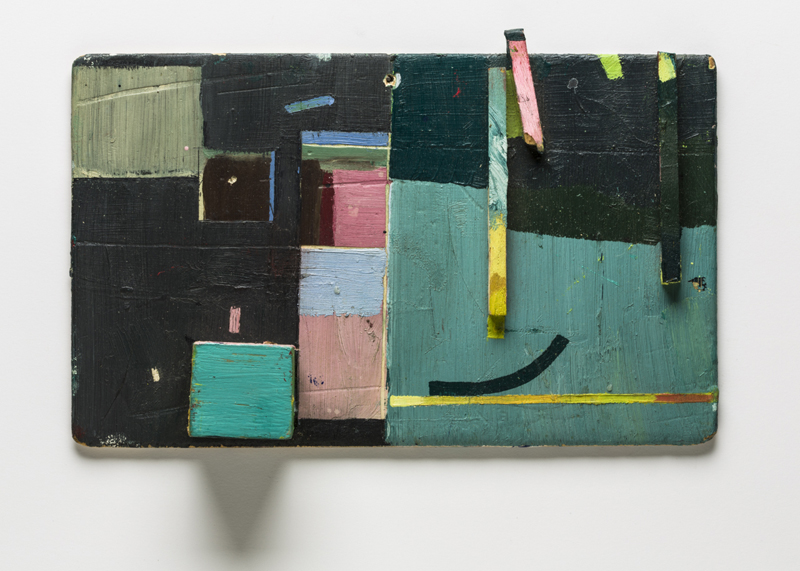 A noticeable difference when following the development of Pfaff's work is the change in scale. The artist's work in the Wayne State University Art Collection is much smaller in size relative to her current sculptures and installations, which can take up an entire room. Roy, c. 1970, made simply of Styrofoam and a painted wire, demonstrates just how much Pfaff's relationship with scale has changed. The sculpture measures just 4" x 5" x 5," forcing the viewer to get close to fully examine it. Because of the intimate distance required to experience the full detail of the piece, the work forms a kind of personal connection with the viewer. The painted wire sticking out of the Styrofoam recalls one of Eva Hesse's most noted sculptures, Hang Up, 1966, which featured a painted wire protruding out of a cloth-covered frame (Hesse attended Yale not long before Pfaff). Though Pfaff's current work is much larger in scale, it still maintains the same personal connection that is seen in her formative work. 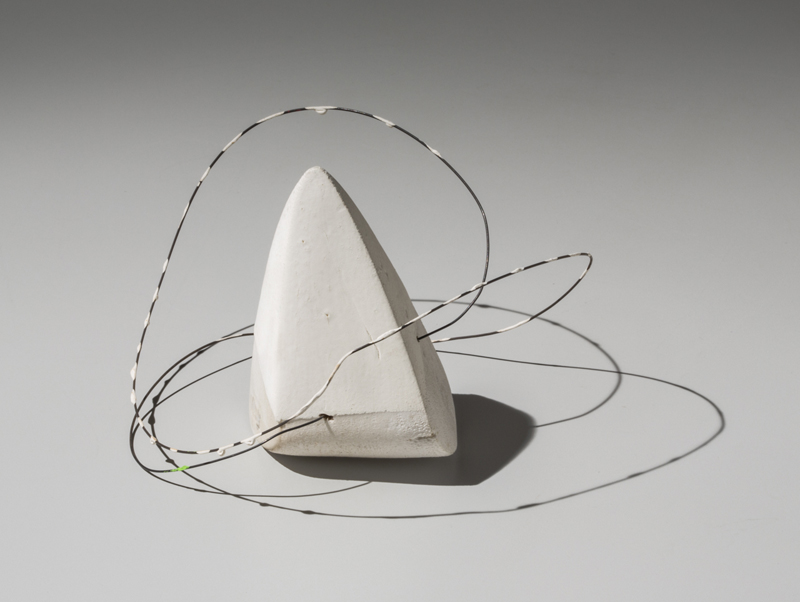 While the era of minimalism preceding Pfaff's work attempted to distance the artist from the art, her work clearly shows the "artist's hand" and process involved in its conception. Untitled, c. 1970, made of oil on plaster glued to Styrofoam, illustrates the process the artist took in creating the piece. The separate layers of paint act as a guide, showing which steps were involved in the sculpture's formation. The final form of the work is ultimately dictated by the properties of the material Pfaff used, rather than artistic control; the oil is therefore left looking raw and unfinished—giving the object an "organic" aesthetic. When considering Pfaff's current work, a visible process still plays as large a role as it did in her earlier work. In her recent work, the artist uses a technique of pouring melted plastic over her sculptures. This, like the pouring of oil paint seen in Untitled, highlights the way in which she created the sculpture, adding another layer of visual information work.  Like Hans' (antique), Untitled too furthers the effect of three-dimensional space by contrasting deeply-saturated hues against a white base—something that has remained a constant throughout all of Pfaff's work.

The thirteen early sculptural works in the Wayne State Art Collection provide an insightful look at the way in which Pfaff has transformed as an artist and expanded her visual vocabulary. Since her time at Wayne State University, Pfaff has gone on to become an accomplished artist, creating large-scale installations in galleries and museums throughout the world. In addition to her success as an artist, Pfaff has held several prestigious academic positions, including Professor of Art and Co-Chair of the Art Department at Bard College since 1995. Pfaff's success as an artist and educator can be attributed to many factors, but it is undeniable that the time she spent in Detroit as a teenager and young adult have had an impact on her life and  work.

Text written by Aleksey Kondratyev.
Aleksey Kondrayev was born in Kyrgyzstan in 1993, and is pursuing a B.F.A at Wayne State University. In addition to working at the Wayne state University Art Collection, he is also co-editor and founder of Stand, a photographic journal showcasing the work and thoughts of various contemporary photographers from all areas of the world.

Images are copyright of the artist and are reproduced here with her permission.