Making of the Mundane 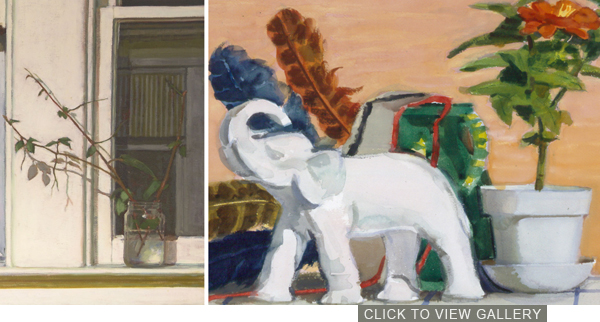 The mundane refers to the often overlooked, insignificant objects and scenes that exist in daily life. These objects originate from the earthly world as opposed to the heavenly or spiritual, and yet when artists focus their attention to everyday objects and depict them with the same intention of art, the mundane transcends its original purpose. The rendering of the mundane provides the opportunity for an artist to recreate their surroundings down to minute details and to test the boundaries of representational depiction and their own creativity (McKinnon). Robert J. Wilbert (1929 – 2016), an artist and professor in the art department at Wayne State University, explored the depiction of objects, which when regarded individually may be thought of as ordinary or insignificant. However, Wilbert's use of color and composition creates a depiction that transcends the traditional still life. Wilbert's fascination with the essence of objects is not only obvious in his own work, but also seen in his influence on students such as Michael Mahoney, Ellen Phelan, Nancy Mitchnick, Kathleen Rashid, and Lila Kadaj.

Wilbert entered the art scene in 1956, right before one the most well-known arts movement took off in the city of Detroit. The Cass Corridor movement refers to the 1960's and 70's when space was cheap but social issues such as poverty, race, the Viet Nam war, and industrial decline overwhelmed the city. The changing social and political landscape resulted in a cultural revolution, supported by drug culture, political protests, underground newspapers, music, literature, and art (Apel). Detroit artists from this time are known for the "Cass Corridor aesthetic", a gritty urban style that reflected the abandonment of the city. While many artists incorporated industrial scraps that littered the city into their work, others used everyday objects. Either way these artists used ordinary materials, industrial or not, to change the perception of their surroundings and the context of the object itself.

The rendering of everyday objects, with equal precision and dedication to that of a work of art, has occurred since the first century A.D. seen in the form of wall murals (Kenway). During the 17th century the interest in the mundane increased as artists began to favor realism and stray from the idealization of subjects. When examining overlooked objects in daily life, the mundane may take on hyper-realistic qualities or become so real it is perceived as surreal. The perception of the mundane has been described as admiration and simultaneous irritation, the art historian Hanneke Grootenboer explains, "admiration because of the artist's virtuosity in rendering a nearly perfect image of reality, and irritation because the image has nothing more to offer than a meticulously painted recording of meaningless daily life objects" (Kenway).

Wilbert's dedication to Wayne State's painting department had considerable influence on the students and brought "the program to prominence, locally and nationally". Wilbert was a committed teacher and ensured that students came away from his courses knowing the basics, "he could talk about all kinds of paintings and color and composition and structure," said Michael Mahoney (Detroit News). In his own work, Wilbert is known for "creating the mystical out of the ordinary" as quoted by Linda Mednelson, a former student. Known as a painter's painter, Wilbert continuously explored inventions among the traditional genre of still life (McKinnon). His work feels comforting, where compositions of objects belong together, even the peculiar and those that should be out of place. The focus on mundane objects within his oeuvre surpasses representation, depicting the essence and truth that he finds within.

The selection of objects depicted together alters the perception of each individual item, as seen in Wilbert's Still Life with Chair and Bobcat. The work is filled with objects arranged in a composition that creates meaning and transcends the identity and purpose of each individual object. While the majority of objects are recognized as household items, the bobcat looks at home as well. Instantly, the viewer is aware of the familiarity of objects, but after a moment realizes the strangeness for a bobcat and a checkerboard to belong together. Michael Mahoney's Still Life with Table and Chair uses ordinary objects and depicts them in a way that surpasses objectivity to express a mood or feeling. Through "subject, color, touch and organization" of Mahoney's work, the artist reflects "the content of [his] feelings and thoughts without relying on signs or storytelling" (Manifest). Mahoney's Still Life with Phone is reminiscent of home without an extended narrative. It is the daily life that does not seek attention, each object humble and unassuming, yet routine. Within these works, the relationship of objects in the composition aids in the construction of the overall message or feeling of the work, in which objects acquire additional meaning dependent on their surroundings.

Objects and scenes of daily life evolve under the artists' gaze. Nancy Mitchnick's Forsythe Window, serves as an example of representational painting merging with abstraction. While the structure of the window scene is evident, Mitchnick's main focus is the shifting colors. The subtle blending of color and simple brushstrokes creates a captivating scene that draws the viewer in, transforming the window into an entrance of the unknown. Kathleen Rashid's Hammer is similar in how the fixated representation develops into a study not only on color and reflection, but an observation on how we perceive the mundane.

Along with teaching art techniques, Wilbert also insisted on exploration. "Robert was very alert to seeing a student's actual originality and encouraging it," said Ellen Phelan, a student in the late 1960's and early 70's who became an artist and educator (Detroit News). Phelan is known for her doll series, such as the work Applause, in which she creates still life compositions and narratives with dolls. These compositions reflect human nature and complex emotions that the viewer relates to through the rendering of ordinary objects.

The depiction of the mundane within art has the ability to elevate the common perception beyond original basic purpose and function of an object. With the change of context from earthly object to fine art subject, our comprehension of the object shifts (Kenway). Wilbert's Chartreuse – Gladiolas demonstrates his ability in capturing light and feeling. The chartreuse background glows, contrasting against the red gladiolas. The effect entrances the viewer at what could be a simplistic rendering of flowers yet inspires melancholy. Ellen Phelan exhibits a similar quality in her Pink Rookwood (Champlain Roses). Phelan focuses on light within her watercolors, creating expressive moods through layering. Mitchnick's depiction of Iris in Vase serves as another example of depicting the transformational abilities of an object.  Flowers, being an object that many view for aesthetic, decorative purposes, transform into expressions about life, death, or emotions within the context of art.

An artists' depiction of an everyday object alludes to stories and the history of the objects. Lila Kadaj's work (shoe painting), tells of all the places it's been and roads it walked. Portrayals of such objects can lead the viewer to visualizing an imaginary owner to which the objects belong to. Wilbert's Banana Cluster and Kadaj's (yellow mug) provide insight to someone's personal taste, or a part of their daily routine. These depictions of daily objects as fine art bring acknowledgement to the ritual of the everyday. With this appreciation of ritual, objects transcend from earthly to the spiritual.

The subtle details within a work ground it within reality, whereas the artists' techniques and inventions create awareness of an object's truth. Wilbert's Plaster Elephant and Zinnia is an example of his dedication to the depiction of objects yet demonstrates how he glazes over the details that are not necessary in the reality he is constructing. The use of color and brushwork allows focus to the objects' essence, transcending the physical attributes of the object. Rashid's Screen demonstrates her interest in the overlooked and her ability in rendering subtle visual effects (Panton). The hazy view through the window is amplified next to the clean depiction of the windowsill. In this portrayal, the mundane becomes sentimental with the ability to spark nostalgia and remembrance, evoking an almost dream-like quality of the ordinary. In Columns and Pine Trees, Mitchnick favors expression of brushstrokes over details, immersing the viewer. The physical properties of the objects are evident and authenticate their value and purpose, yet these artists portray the insignificant in a way that romanticizes what others glance past.

Wilbert's influence on students at Wayne State University during the Cass Corridor movement extends to the greater community. His passion for teaching and the arts remains well-known and his previous students have continued to teach, carrying on Wilbert's influence as well as their own. Mahoney, Phelan, Mitchnick, Rashid, and Kadaj all have taught the arts within their careers, impacting the next generation of artists. Mahoney taught at various locations in Detroit and as a professor in the painting department at Western Illinois University. Phelan coordinated Harvard University's Visual and Environmental studies program from 1995-2000. Mitchnick taught at a multitude of institutions, including Wayne State University, Bard College, California Institute of Arts, and Harvard University. Rashid has led studio workshops at the Detroit Institute of Art. Kadaj taught art in Detroit Public schools for almost 27 years as well as various universities. The importance of teachers and mentors is a long-held tradition within the arts, preserving the interest and techniques of prominent artists, which simultaneously change with the times and the next generation.

The fascination in the mundane brings attention to aspects of life that are often overlooked. Each of these artists demonstrate how an ordinary object can transform into something mystical or expressive when brought into the realm of fine art. The change of context alters the meaning of the object, surpassing the earthly origin the mundane is associated with. When confronted with daily objects portrayed in fine art, we find a deeper meaning of the objects that fill our daily lives, blurring the edges of what is art and what is life.

Apel, Dora. "Art and the Industrial City". Up from the Streets: Detroit Art from the Duffy Warehouse Collection. 2001. https://guides.lib.wayne.edu/ld.php?content_id=6554978