Picture of the Week: Jesus, Ipswich by Nancy Mitchnick 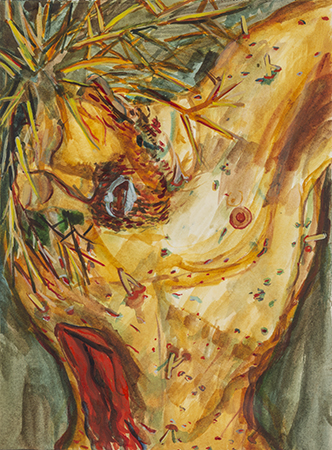 Nancy Mitchnick is an artist and educator. Studying at Wayne State University, she was one of the artists of Detroit’s Cass Corridor art movement. While many Cass Corridor artists composed abstract work, she took more of a naturalistic approach to her art. She moved to New York City in 1973 and while living there, Mitchnick “drove a taxi, worked in an after-hours joint, assisted Brice Marden, raised her daughter, [and] taught at Bard College.” After ten years in the city, she had a successful exhibition at Hirschl and Adler Modern and another one two years later. When it comes to teaching, Mitchnick was a full-time faculty member at the California Institute of the Arts for ten years and the Rudolph Arnheim Lecturer on Studio Arts at Harvard University for 15 years. She is the recipient of many awards, including a Guggenheim Fellowship, a Pollock Krasner Foundation Grant, a National Endowment for the Arts award, the Phi Beta Kappa Teaching Award at Harvard College, and the 2015 Visual Arts Fellow of Kresge Arts in Detroit.

Mitchnick’s work has been described as “emotional and strong, often various and sometimes humorous.” In the case of her 1999-2000 watercolor Jesus, Ipswich, she opts for the emotional, strong route. This image depicts the crucifixion of Jesus Christ. However, this rendition is not one you would normally see in traditional Christian imagery. Typical crucifixion images include Jesus hanging on the cross, sometimes with the two thieves hanging on either side of him, while St. Mary and St. John witness the scene from below and mourn. In contrast, Mitchnick paints a close-up version of Jesus, yet she incorporates visual cues that affirm this is still an image of the crucifixion. Jesus’s head droops to the left under the pain of the crown of thorns. Also to the left and below his head is his large wound from being pierced in his side. His shoulders are elevated above his head, which suggests that his body is hanging on the cross. By focusing solely on the image of Jesus, perhaps Mitchnick is encouraging the viewer to meditate on the sufferings of Christ, as opposed to the broader setting and additional figures in traditional crucifixion images. Mitchnick employs expressive brushstrokes for this scene, which contribute to the intensity and agony of it. She accentuates each thorn in Jesus’s crown, each hair in his beard, each droplet of blood that trickles down his body from the crown of thrones and the wound in his side, and the lines of his rib cage as he releases his final breath from his white lips.