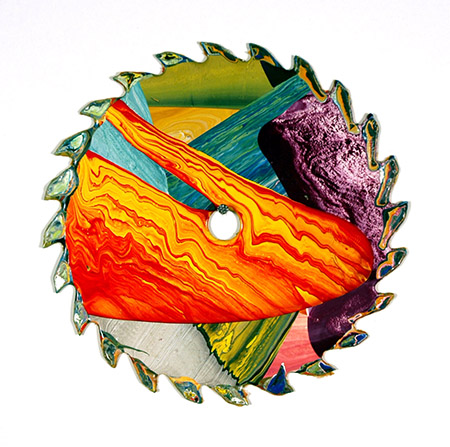 John Egner was a beloved Detroit artist, educator, mentor, husband, father, grandfather, and friend. He was born in Philadelphia in 1940 and moved to Detroit in 1966. He received his B.F.A. in 1963 from the University of the Arts in Philadelphia, and his M.F.A. from Yale University in 1966. Although Egner lived in Detroit for many years, he considered himself a New Yorker at heart. As a teenager he spent some time at the Art Students’ League of New York and stayed in the city for a few more years before pursuing his graduate studies at Yale. He frequently visited New York even after moving to Detroit and continued to travel between the two cities after he moved out of Detroit. His relationships with gallerist Susanne Hilberry and collector James Duffy further strengthened his connection between Detroit and New York. Egner collaborated with Duffy and became an advisor, introducing Duffy to emerging artists at the time such as Judy Pfaff, Joel Shapiro, Guy Goodwin, and Elizabeth Murray.

Egner “became an inspirational art teacher to generations of Detroit artists,” teaching at Wayne State University for 21 years. He was an integral figure in the Detroit Cass Corridor art movement of the 1960s and 1970s; The art, poetry, and music scene was prominent during this time, along with Detroit’s 1960 Civil Rights Movement and the 1967 riots. Egner was contemporaries with artists such as Gordon Newton, Robert Sestok, Ellen Phelan, Aris Koutroulis, Brenda Goodman, Michael Luchs, Doug James, Nancy Pletos, Steve Foust, Nancy Mitchnick, Jim Chatelain, John Piet, Gilda Snowden, among many more. He enjoyed connecting with people and discussing art, philosophy, and politics. Egner was very humble and had a magnetic personality that left a lasting impression on many people.

Egner’s untitled 1973 saw blade work is currently on view at the Elaine L. Jacob Gallery in Confluent: Detroit Art and University Art Collection. He is “known for his meticulous geometric paintings, drawings, and wooden sculptures,” and this particular work demonstrates his use of geometric painting. Egner paints on either side of a circular saw blade, one side with an abstract image and the other with a more naturalistic birthday cake image for James Duffy. His use of the circular saw blade appeals to the industrial aesthetic that is often present in Cass Corridor art of the 1960s and 1970s. The saw blade is very tiny, spanning only 5 ½ inches in diameter, yet Egner manages to fill the space with astounding detail. The abstract image includes forms painted in shades of orange, yellow, purple, pink, blue, and green, with minute dots and swirls within each form. Egner employs warm tones of gold, yellow, orange, and red for the birthday message, along with pink roses for the birthday cake. The streaks of red, yellow, and orange paint travel across the “Happy Birthday” text, creating continuity between the birthday message and abstract image. These images on either side of the circular saw blade epitomize both Egner’s love of art and of human connection.