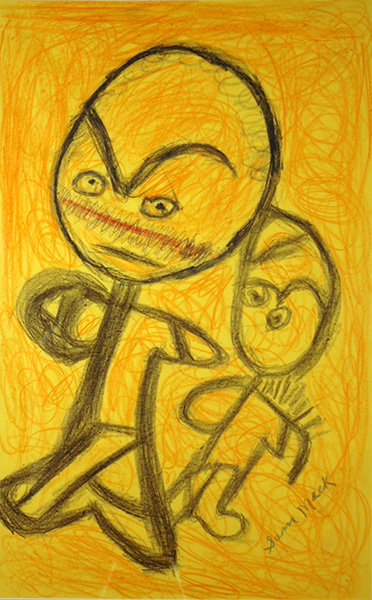 Sam Mackey was known to be a wise man, but he didn’t credit this with his age– rather, he insisted that paying attention to the world around you made you wise, and that he did. Mackey was the major influence behind his grandson’s, Tyree Guyton’s, artistic career. When devastation hit the neighborhood Guyton grew up in, it was his grandfather who told him to “pick up a paintbrush instead of a weapon and find a solution.” 1988, the Heidelberg Project was born.

Mackey was a house painter by trade, but his creativity flourished in projects like Heidelberg, and also in small-scale art. This untitled drawing is the perfect example of Mackey’s lively art. Its simplicity derives from his use of markers and crayons, steering away from the seriousness of academic art. But it is the two figures in this drawing that shift the mood of this work. They have furrowed brows that suggest a serious tone. Who are these figures? Perhaps Mackey himself along with a companion.